The ``Establishment`` Republican Party Has Lost Touch With Its Principles & Voters

The ``Establishment`` Republican Party (derisively called ``RINOs``) refers to at least one of:
(1) Politicians who self-describe as ``Moderate`` or ``Centrist``... or say ``I'm Conservative,`` but mean little more than just desiring lower taxes, while refusing to prioritize conservative social values & priorities (beyond ``I'm pro-life & pro-gun``).
(2) Politicians who are satisfied with the progress provided by the defanged bills allowed by ``leadership`` to reach the floor of both legislative chambers.
(3) Politicians who are willing to use the levers of institutional power (redistricting, floor rules, caucus campaign financing...) to subvert the will of the majority of their own party's voters.

Reagan once characterized the Republican Party as a 3-legged stool (missing any of the legs, it would not stand):

(1) One leg is made up of those most animated by social & religious conservatism (family values, and traditional moral foundations of the country, esp. sexual morality), as well as anything touching on religion in public life or education.

(2) The second leg is made up of people who are concerned with national defense, either as a spending priority, as a means of disseminating American ideals (like democracy), or as part of national-greatness patriotism.

It could be argued that the seat, which holds the stool together, is the conservative media ecosystem: particularly the FOX News channel (to much lesser extent Newsmax), AM talk radio, and a collection of conservative periodicals like the Wall Street Journal & New York Post (to lesser extent Breitbart, Daily Caller, and organized Social Media influencers). Their tendency to have a relatively unified message/narrative across all platforms maintains cohesiveness in conservatism. A case can be made for supporting law enforcement being another part of that seat with it having clear connections to all 3 legs.

This coalition continues to mostly hold together. However, it must be said, several of the legs have begun transforming, if not splintering, from the Republican party (often along cultural lines).

(1) The party has mostly exploited social & religious conservatives by using culture war issues to drive turnout, while producing few if any actual accomplishments on the social conservative front. The tendency is to talk about these issues around elections, then refuse to talk about them or drive legislation due to backlash from mainstream media and social pressure in the urban areas where they live and work. More fundamentally, Republican politicians often seem to compromise on these issues, in order to get budgetary concessions.

(2) The failure of nation-building as an enterprise has led to disfavor of “neo-conservative” interventionism esp. in the Trump era, and a rise in isolationist sympathies among the electorate (though support for the military generally remains strong).

(3) Corporate America not only tends to be headquartered in large cities, which have consistently been havens of (marxist) “progressivism”, and staffed with products of elite colleges, which have been bastions of the same “progressivism”, but it has largely signed-on to the Corporate Welfare model of exploitationism (crony capitalism). Why out compete and innovate, when you can lobby your way to favorable treatment by the Government?

In short, our criticism is that “Establishment” Republicans tend to be:

(a) insufficiently principled (esp. to social conservatism), and too often unwilling to articulate what those principles even are,

(b) unwilling to fight even to promote their constituents’ core values (and too willing to sell those values out in compromises), if it means negative publicity from the liberal press or vocal opposition from liberal activist groups (like teacher union leadership), and

(c) too willing to cater to donor interests (esp. state or federal Chamber of Commerce leadership) over the priorities of the bulk of their own constituents. 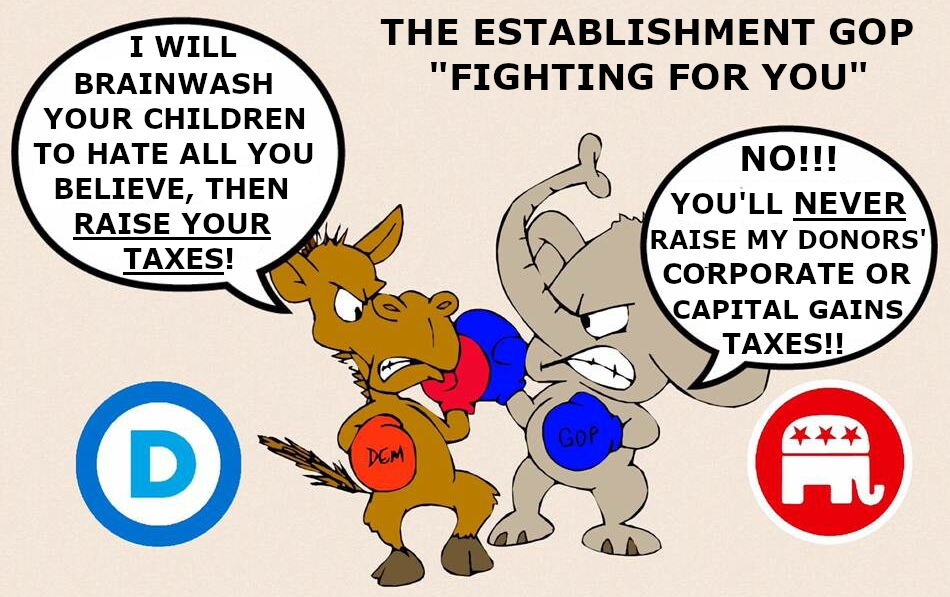 With those critiques noted, we acknowledge that “Liberty Republicans” and “Establishment Republicans” agree on perhaps 80%+ of bills & priorities. Our disagreements are “within the family,” versus a Democratic Party that in many respects has left reality & sanity behind.

What are some of our key principles & priorities, with which we welcome “Establishment” cooperation?

Fighting for individual liberty and freedom

Welcoming religious faith and values in the public square, the 1st two clauses of the Bill of Rights

Protecting the right to assembly and peaceful protest

Expanding functional 2nd Amendment rights, and the right to self defense

Medical Freedom that protects confidentiality and conscientious refusal of treatment

No mandates or new regulations (and removal of unnecessary ones)

No nanny-state, larger than life government

No domestic economic protectionism, or picking “winners and losers” among industries using the force of government

No sweetheart deals made with taxpayer dollars or subsidies

No political or social indoctrination in public schools

No discrimination by the state on the basis of race, sex, or creed

(*Substantial credit to Rep. Savannah Maddox for list compilation, though with alterations and expansions.)